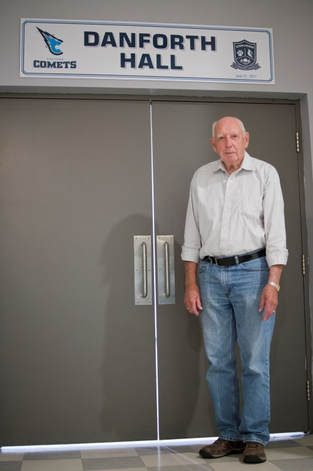 Dean Danforth, member of the CN Pensioners Association of Manitoba was recently honoured when the Corydon Community Centre in Winnipeg changed the name of the gymnasium to “Danforth Hall” in recognition of his volunteer service for the past 43 years.

Over this time, Dean has served in many capacities such as a bingo caller, baseball convenor, coaching children’s teams and managing hall rentals.  He is also most recognized as their favorite bartender for those attending socials at the centre.  He loves meeting up with friends from the community and finds it so interesting to see generation after generation from the same family returning to the community centre.

Dean has also received Baseball Manitoba’s outstanding achievement award in 2001 and is a member of the volunteers’ honour society at the Manitoba Baseball Hall of Fame in Morden, MB.  Then in 2013 the Province of Manitoba - Manitoba Council on Aging, recognized Dean for his outstanding contribution to the Seniors of Manitoba.

Thank you Dean for all you do for your community! 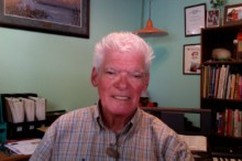 I became involved with a group called LINKS Post-Legal Adoption Support Group in Winnipeg in 1991 around the time that I retired from CN.  I was interested in this group because I was adopted as a baby in Regina in 1935 when I was a year old.  I eventually became President of the group and started a website and got their records computerized.  Until a few years ago we held meetings twice a month for any member of the adoption community.

Over the past 24 years we have had over 1000 reunions as a result of our registry being on line. I assist anyone wishing to find any member of their family who was adopted or any adoptee searching for birth family.  Sometimes a vast amount of research is involved, and other times not.  Many people such as aunts, uncles, cousins, grandparents have no rights under the existing adoption law of Manitoba and they come to LINKS for help and support.

If you know of anyone that would like to search or just be listed on our registry, or if they have any questions, please have them call me at 204-257-4742, cell 204-799-8273 or via e-mail at rkading@shaw.ca.  More adoption information for Manitoba and other provinces can be obtained on our website at: http://members.shaw.ca/linksadoptionsupport. 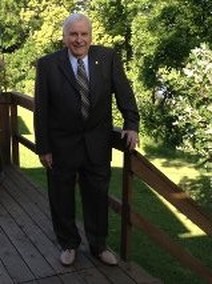 In the spring of 1960, Rivers High School in Rivers, Manitoba made a decision to enter a football team into the Rolling River High School Football League.  However, they didn’t have a person inside the school, with any football experience, to take over the team.  Enter a young man by the name of Joe Salay who had been working for CN Rail in Rivers as a telegraph operator since 1956.  Joe, who had played both high school and junior football as a young man, stepped up to both build and coach the team.

In Joe’s own words, “the assortment of guys that showed up at camp in 1960 was surprising and disappointing.  Not one would-be-player really knew a whole lot about football, but the enthusiasm was certainly there.  So we did what we could”.

Unfortunately, when that first football season arrived, a new school gym teacher with no football experience of any kind wanted to take over the team so Joe graciously stepped aside.  However, it wasn’t long before the school recognized the mistake they had made and asked Joe to return.  It was too late that year to salvage the season and the team went without winning a single game.

1961 would be a very different story and Joe settled into building a strong football program over the next three years culminating with the Rams finishing in first place and winning the Rolling River School Division High School Football League Championship in 1963.

At the same time (1967), he was recruited by the Parks Board to head-up and start six man football at Norberry.  Teams were entered in all four age categories (10 through 14 years).  Joe also became the contact for the South-East Division and even coached the 14 year olds over two years, reaching the city final in 1967.  And, if that wasn’t enough he became Referee-and Chief of the South-East Division from 1968 to 1969.

In addition to his work with football at Norberry, he coached bantam, midget and juvenile hockey from 1967 through to 1970 and organized house league baseball and coached at the pony league level.

About 25 years later after leaving Rivers, Joe happened to be back there on business and while waiting to meet one of his contacts at the hotel, he bumped into one of his former fullbacks, Dave Elliott who commented:  “You took a bunch of guys who had nothing to do and were going nowhere.  You melded us into one hell of a football team.  We often get together and we agree that the life lessons you taught us, how to win without being arrogant, how to lose with dignity, how to get along with each other, the camaraderie, the conditioning and the dedication, all of this we took with us when we left high school.  We could have stayed and played football as long as you wanted us to”.  It was at that moment that Joe realized what a positive influence he had on their lives.  That was extremely gratifying! 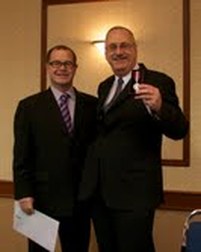 Winnipegger and CN Pensioner, Jim Kane was honored to receive a Queen Elizabeth II Diamond Jubilee Medal late last year.  Jim’s medal was one of 30 awarded to the Canadian AIDS Society (CAS) to honour those Canadians who have demonstrated an exceptional commitment to HIV/AIDS work.  Jim commented:

“I have been inspired and motivated by many of my peers and friends in the movement whose dedication made a difference to so many,” Kane told OutWords. “This is an honour I will remember with great passion and fondness.”
Manitoba Healthy Living Minister Jim Rondeau made the presentation to Jim at the Manitoba HIV conference on which was held on Tuesday, Nov. 6, at 11:45 a.m. at the Victoria Inn in Winnipeg.

“The medal recognizes individuals who have made a significant contribution to a province, territory, region or community; have distinguished themselves from others employed or involved in the same field; and are highly respected,” the CAS stated in a release.

Jim, a CN Pensioner, is a member of the board of Nine Circles Community Health Centre in Winnipeg. He also serves as Vice Chair on the board of the CAS and is the Prairie’s Regional PLWHIV/AIDS Director. He is on the board of the Global Network of People living with HIV/AIDS. As well, he participates on the Canadian Treatment Action Council.

Jim states: “I believe that the HIV/AIDS community’s thoughts were reflected well in the Canadian Aids Society’s announcement. As Margaret Mead noted: ‘Never doubt that a small group of thoughtful, committed citizens can change the world. Indeed, it is the only thing that ever has.’ We have made significant progress, but there is still much work to be done

In appreciation of the donation made to the Prairie Dog Central Railway by the CN Pensioners Association of Manitoba, The Vintage Locomotive Society Inc has presented us with a Stock Certificate Memento. To view this commemorative stock certificate, please click here. 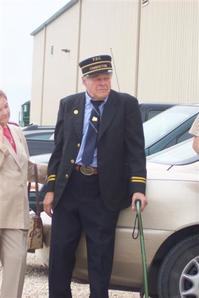 John Almdal was honored in November 2010 when he received
a life member award from the Prairie Dog Central Railway. 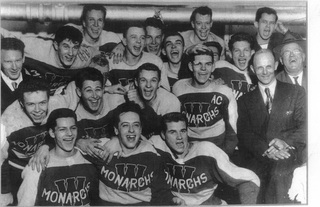 On October 5th, 2013, The 1951 Winnipeg Monarch Hockey Team was
inducted into the Manitoba Hockey Hall of Fame. There were over 650
people in attendance at this special event. Two of our very own CN Pensioners
were on that original team — Don Collins and John Mozol. Check out the
“Then” and “Now” photos. Congratulations! 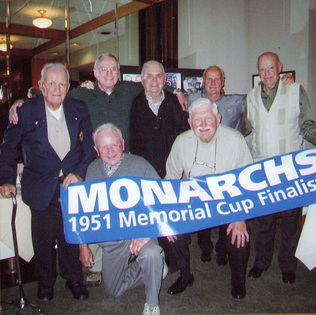 Five years after founding the Sandy Lake Endowment Fund, Earl Symonds, a CN Pensioner, is stepping back. It was Earl’s initiative and money that originally got the fund going.

The son of a Station agent, Earl grew up in the community of Sandy Lake. Following in his father’s footsteps, Earl began his own railway career. Upon his retirement, Earl decided to return to his roots and moved back to Sandy Lake. He felt that when a community is good to you, it is important to give something back, and so now that he was back in Sandy Lake, he wanted to make a difference in the community. Upon investigating endow-ment funds, he learned that donations to an endowment fund are invested and grants are funded by the interest earned, meaning the principal is never touched. This would be the perfect way to “Pay it Forward”.

At the start up of the Endowment Fund, Earl donated $25, 000 of his own money and has been matching dona-tions ever since. People are encouraged to donate and local organizations are encouraged to apply for grants which go towards the replacement and purchase of items that enhance and support the Sandy Lake Community. Thanks to Earl’s commitment and vision, the fund has been set up in such a way so that it is easy to pass the torch. Earl was recently presented with an honorary lifetime membership to the Sandy Lake Endowment Fund. Congratulations to Earl! 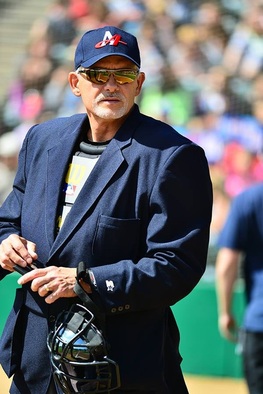 Several years ago, after jostling the idea around of coming back to umpire baseball for a few years, Hank started umpiring young kids just to get back into the swing of things. After two years he was asked to umpire midget
age players at the provincial level and then quickly rose to umpiring junior and senior age levels at the Western Canada Tournaments. Because of his advanced age of 59 years, the chance of achieving a national tournament
was slim, so Hank asked to be evaluated by umpiring a Winnipeg Goldeyes Game versus the St.Paul Saints in 2012. This was granted, and what a blast it was regardless of that cold and rainy day in early May. This was
something that he wanted to do before he was on the wrong side of the grass. Professional dressing room, walking on the field, your name being announced, the national anthems, hot meal after—the whole nine yards.
Hank was so fired up, that when the first pitch was thrown right down the middle, he almost forgot what to say. He barked out a delayed strike one, and the rest of the game was fine.

Last year, Hank was asked by the American Association Umpire in Chief to be the crew chief for the three game exhibition series. The series went so well, that after one month of the season, radio announcer Paul Edmonds said that the best umpiring that the Goldeyes got so far was from Hank’s crew back in May. It was a nice compliment— something umpires don't receive too much of.

After retiring from CN in December of 2012. Hank promised himself that he would go to an umpire camp. Upon
review with the Pro Umpire Camp Director in Shreveport, Louisiana, it was a go! So Hank packed up and attended the camp in mid March. He had what he thought was a good camp, and in his exit interview, was asked to be on the American Association Staff as a local umpire here in Winnipeg. So, if you come to a game this year, and Hank is on the field, it's okay to boo, but it's also okay to cheer ! Hank hopes you enjoy the game!

Lawrence Webb, retired Machinist, was recognized by the Canadian Blood Society for his blood donations totalling 150 units of whole blood.

Al Donnet, deceased retired Pipe Fitter, was elected to the Mantioba Sports Hall of Fame. He and his team won the Dominion Soccer Championship in 1954.

Ed Mazur, retired Machinist, was inducted into the Manitoba Hall Sports Hall of Fame. His team, The Norwood / St. Boniface Legionnaires were the Canadian Football Champions in 1952.

Did you know that some of our local pensioners have authored books? To obtain a copy of one of these books and for an interesting read check out the following:

To purchase one of these books, please contact the Webmaster at cnpamanioba@gmail.com.  She will put you in touch.